We have one of the best and largest dedicated pickleball courts in Western PA and beyond, starting with regulation two-tone surface all built specifically for pickleball.  We have separation fences between courts to minimize ball interference and a baseline to fence line of close to 11 feet allowing for full movement in the back court. There is 6 feet from the side fence to the side lines of the court and by stopping the separation fence at the baselines, allow for players to handle shots going wider than the fence. Each court is 63 feet in length x 32 feet wide. The nets are set to allow for a ball to pass underneath. The plaza area  in between the courts which include several benches to rest and relax, along with a dinking practice walls.

Right next to the pickleball courts are restrooms and water fountains and bottle filling fountains. We also recently installed an AED. Our pickleball courts are the first thing you will see as you enter Graham Park in Cranberry Township, right after the basketball and tennis courts. Public times to use the pickleball courts will vary but usually between 1:00 PM to 4:00 PM Monday-Sunday. All other times require a CTPA membership to play. Our courts are paid for and maintained by our members who volunteer countless hours to make our facility very special. Our recent 5 court expansion was paid for via a fundraiser campaign and membership fees in one year. Once you play on these courts you quickly become spoiled.  It is very special to play pickleball on dedicated courts meeting all USAPA regulations. 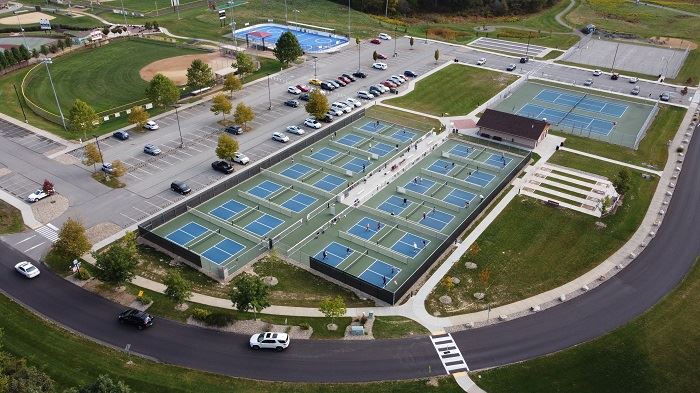 We have room to expand using temporary nets and taped lines up to 6 courts on our tennis courts and an additional 4-6 courts on our basketball courts. All located in the same complex. There is also additional raw land available to further expand our outdoor dedicated pickleball courts. Without a doubt, Cranberry Township Pickleball Association (CTPA) is becoming one of the leaders in the pickleball world and our outdoor facility in Graham Park, shows the growth and support of Cranberry Township and the surrounding area.