It may not be disco, but the goal for Cranberry Township EMS has remained the same since 1969: stayin’ alive.

That not only goes for the community the organization serves, but for the organization itself – a constant challenge throughout the 50-year history. It’s a history that is built on ensuring paramedics and crews are available when the call comes and responding with service of the highest quality.

“To have a service that has been here for that long and has been an integral part of the community is an impressive feat,” said Mandy Cousins, CTEMS’ Outreach Coordinator.

Even more impressive when surveying the EMS landscape throughout Pennsylvania, where rising costs and healthcare regulations have driven many organizations out of business – roughly 22 percent from 2002-2018.

Add to that a stagnant call volume and a younger demographic becoming more prominent in the Township and the challenges seem never-ending.

That hasn’t stopped crews from providing the best service possible when called upon.

“Our mission is simple – preserve life and promote health and safety in our community,” said Ted Fessides, Chief and Executive Director of Cranberry EMS.

The organization has been independent from the Township since 1982 and has grown alongside the Township. Fessides notes that with the number of out-of-town workers, hotels, youth sports leagues, shopping and dining areas and the busy highway system, Cranberry EMS must plan to serve more than just the roughly 32,000 residents.

That growth has occurred primarily by relying on health insurance reimbursements to keep them afloat. However, Fessides is quick to note that despite their best efforts, expenditures continue mounting while reimbursements get smaller.

That includes Medicare, the organization’s largest payer, which reimburses significantly less than what a service costs. Fessides said the gap used to be filled by commercial insurance payments, but those are also declining.

Then there’s the matter of unpaid bills sent to collections, which Fessides said are over half a million dollars and growing.

Meanwhile, expenses do what they do: rise. That includes keeping the lights on, equipping ambulances with the proper tools and employing a trained staff. Fessides doesn’t mince words, saying it’s hard to convince potential employees to take on the stress, challenges and demands of working as a paramedic for not much more than they could make in fast food service.

To help ease the blow of these challenges, the Township is working on a new partnership with CTEMS.

Additionally, there are bright spots, including the organization’s Subscription Service, which limits out of pocket expenses for those who sign up. Fessides estimated about 25 percent of those solicited have taken advantage of the offer.

Despite the challenges 2020 has presented, including the pandemic and continued loss of insurance reimbursements, CTEMS was recognized as the 2020 Pennsylvania Small EMS Agency of the Year by the Pennsylvania Department of Health, Bureau of EMS and the Pennsylvania Emergency Health Services Council. The organization earned the award over more than 1,200 EMS agencies in Pennsylvania.

The commitment to serving the community is something CTEMS intends to do for the next 50 years and beyond. 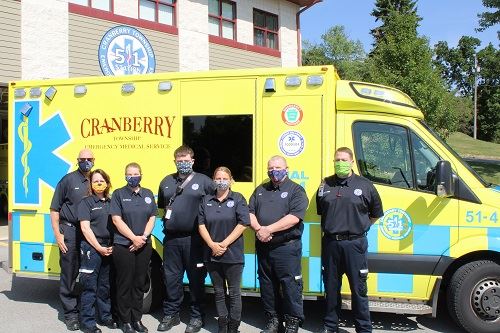